Time to record this blasted patch so that I can use my studio again!! It was a fun one to construct, however, so I'll share a bit about it with you.

The E-mu drum machine pictured spits out 24 ppq (pulses-per-quarter note) for syncing with other devices that speak that language. I wanted to see whether I could make use of those pulses in other ways... 24 ppq is a real barrage, let me tell you -- that's 96th notes, for the rhythmically inclined among you. 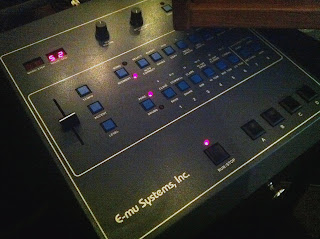 So I ran the pulse output to a 3-stage sequential switch, and took just one of the three stages for my output. 24 neatly divides by 3 to yield a more useful 8 ppq (32nd notes) which I then ran to an 8-stage trigger sequencer, allowing for further subdivisions. 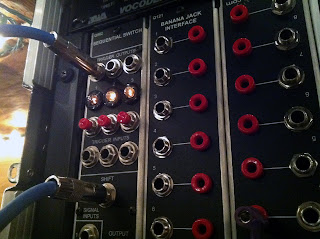 The trigger sequencer has four separate rows, with each row sporting a toggle switch per stage, or step. By specifically setting the switches for each row, I now had at my disposal four useful subdivisions: 32nd notes, 16th notes (which I used for one aspect of the melody), 8th notes, and quarter notes. 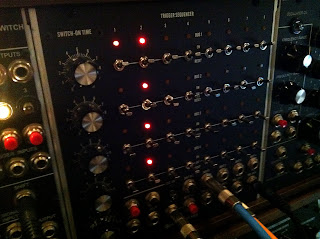