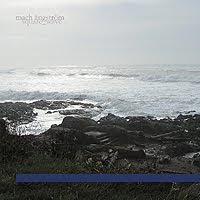 Things don't always happen in the order they're supposed to, and that's alright. So the second of two new albums is ready first. It's available now at CD Baby and will soon be available at the usual digital sites. I'm excited about this one, as Mach Ångström is my first full-on drone release, and contrasts nicely with the other album-to-be.