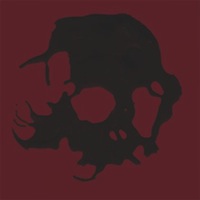 New album! Spacerock guitars, juicy dark drones, psych drums, dense otherworldly atmospheres, Tuvan throat singing, evocative Eastern drones, a lilting mantra for rebirth... A sonicosmic journey of endings and beginnings... Two epic tracks featuring guests Peat Bog (Earthmonkey) and Randall Frazier (Orbit Service) on one, and the vocal talents of Soriah and Prajna on the other. Edition of 450 numbered copies packaged in a custom gatefold book bound sleeve. Also, an edition of 50 numbered and signed copies with a bonus CD-Record of exclusive music (CD playable with an included adapter on a turntable) plus an original art print by AMJ. Available to order at Beta-lactam Ring Records.

"The emphasis is definitely on the “Journey” as mysterious drone-meets-psychedelia act Armchair Migraine Journey embarks on this new trip. Beginning with a medley of dark ambient drones, buzzes, fades and washes, MAGNETIC BLOOD DROWNING, the initial offering on the two-track Blood Coupling Magnet, lays on thick atmosphere before coalescing into a dark psych-rock jam backed by distortion-drenched drums. In the fashion of the best and most “out there” prog, it effortlessly skirts the line between noise and melody; just when you think things are turning into a morass of self-indulgent feedback, the guitar pulls back just enough to get your head nodding again to the moody Krautrock-inspired rhythm. The second composition, REBIRTH BLOOD ΩM, shifts even more drastically, traveling further out into the sonic and philosophical void. Industrial rock drums and heavy overdriven guitar chords straight out of some early Pigface demo open things before suddenly giving way to the gentlest ambient, delicately drawn out chiming tones over a quiet heartbeat punctuated by heavy breaths. Soon, the otherworldly growling trance-drone of Tuvan throat-singing—courtesy of Soriah's Enrique Ugalde—brings the ethereal down to earth. A Buddhist mantra, sung by Prajna, forms the backbone to the song's latter half, as the throat-singing takes turns with a fuzzed out, effects-drenched tanpura to follow the melody of the chant, drifting in and out of harmony with Prajna's voice. Cosmic, earthy, ominous, uplifting and even spiritual, Blood Coupling Magnet is sonically fascinating, but more than that, it's emotionally affecting. Plenty of experimental music can manage to do interesting things with your head (especially if you're that breed of music nerd that likes to spend time thinking about experimental music) but Blood Coupling Magnet works its way into your gut, too.” --Matthew Johnson 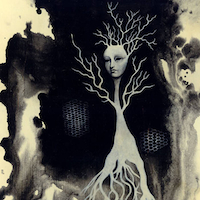 Happy to contribute drums via Armchair Migraine Journey on the latest EP by Un Festín Sagital, with arresting artwork by Jesse Peper. Available on UFS's bandcamp page and in physical form on Beta-lactam Ring Records.
Posted by ty hodson 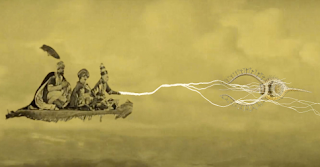 I contributed music from the earliest square_wave archives for this beautifully rendered and wickedly difficult game called Thief of Baghdad.

From the game creator, Michał Rostocki:
TOBAFCASS is a side shooter with unique visual style and characteristic electronic music. For both the story and visual style I took inspiration from "The Thief of Bagdad" a 1924 classic silent adventure movie with Douglas Fairbanks. Game mechanics are of classic ultra-hard side shooter. In particular I was inspired by "Agony" a beautiful yet unforgiving Amiga game from the 90s. Finally most of the enemies come from "Kunstformen der natur" a book by Ernst Hackel full of litoghraphic illustrations of bizzare creatures perfectly organized with Prussian precision and devotion to symmetry. 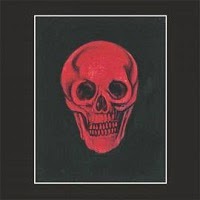 Issued as a numbered edition of 100 copies in a custom made gatefold sleeve, insert and CD-Record. 20 minutes of CD audio and 3 minutes of audio playable on your turntable.