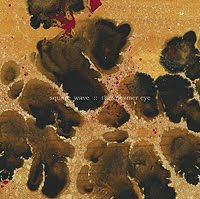 At last, I’m proud to announce a new square_wave album, 'The Mesmer Eye'. Three years in the making, this album returns to the short-form presentation begun with 'Aerodrome'. This album also marks the first time outside participation has crept in. One track includes sonic elements that resulted from a bad rip of a CD by Phil Western (aka Philth) (Download, platEAU, Beehatch) who was kind enough to sign off on my experiment. And a true highlight for me is the artwork provided by Chris McBeth (Beta-lactam Ring Records) whose gorgeous works grace the covers of many BLRR releases.

While working on this album I found myself thinking about stasis, detachment, and decay – that is, a sense of collective isolation that has receded to the background and become a deep-seated fabric upon which we continue to pile Meaningless upon Meaningless. I was also taken with the story of Henry Cavendish, an 18th century experimental scientist who discovered several laws and principles before anyone else – yet he didn’t publish any of them. The most significant was his discovery of Ohm’s Law before Ohm. He conducted his experiments, made important discoveries and took notes, but remained detached from the scientific community. Perhaps because of my fixation on Cavendish, I frequently found myself juxtaposing mental images of the promise of 18th and 19th century science against a future lost in material gain and the perpetuated despoiling of our world. "I'm really not at liberty to discuss this..."